ALEGRIA - The Festival Of Joy 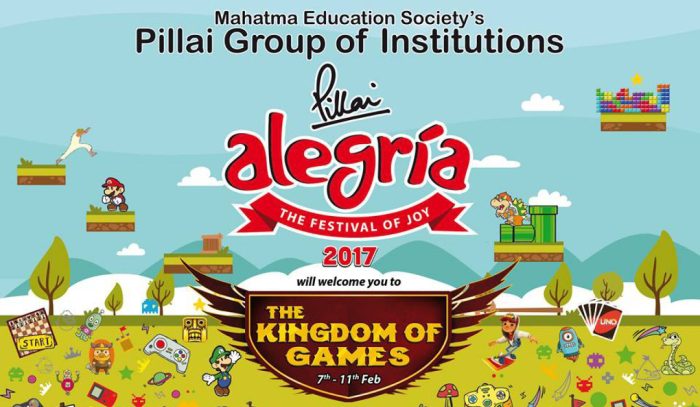 The theme for year 5 of Alegria is finally here. Alegría – The Festival of Joy 2017 will welcome you all to the ‘Kingdom of Games’. We will be showcasing all your favorite games right from childhood to now. So don’t be surprised to see Mario or Pikachu roaming around the Pillai Campus

Software Engineer, voracious reader, a hardcore bibliophile, Bollywood buff and loves to write articles and fiction. His prominent works include 'The Haunted House Mystery', which ranked 6th in Horror worldwide on wattpad and The Lucky Ticket which ranked 11th in Mystery-Thriller. His latest work 'Project Chronos' meddled with science and historical fiction and has been applauded by the readers. The once a year #thecollabprojekt on his blog also received tremendous critical acclaim wherein he did a collaboration with other writers to create a story, encompassing the styles and ideas of the respective collaborators. View all posts by Sooraj Nair